She Dined in the Sun

Looking for the perfect staycay from Dubai or Abu Dhabi? I honestly cannot recommend visiting Sir Bani Yas Island enough. I’ve had a few friends visit and admired their dreamy shots of roaming gazelle and giraffes along with the beautiful safari-like villa’s and have had it on my list for over a year but finally decided to visit last month.

I originally thought the island was pretty small and much more of a “resort” which put me off at first. I don’t like the confinements of zoo’s so did some research before taking the plunge and booking and was pleasantly surprised and hugely impressed by the history of the island.

A natural island about 2 hours south of Abu Dhabi, it was set up by Sheikh Zayed as a wildlife reserve in 1977 where he made a conscious effort to plant millions of trees as part of his “greening the desert” campaign and set up a sanctuary for many of Arabia’s endangered species. The island is home to over 13,000 animals with species including gazelle, oryx, ostrich, giraffes, sea turtles and even cheetahs. The island plays a huge role in the protection and breeding of a number of critically endangered species and even now houses a herd of over 400 Arabian Oryx who were formerly extinct in the wild. Over half the island itself forms the wildlife reserve spanning over 87km squared. It’s a huge space made up of a number of terrains, where you can take part in activities such as hiking, biking, safari drives, kayaking, etc.

The only downside to Sir Bani Yas is that it is a bit of a mission to get to. The drive from Dubai took us just short of 3.5 hours, with a couple of pit stops en route, so be sure to give yourself plenty of time. As you get closer follow signs to the private jetty where you can park up and check in ready for the 20 minute ferry over to the island. Upon arrival on the island you’ll be greeted by the super friendly staff and driven to the resort that you are staying at. 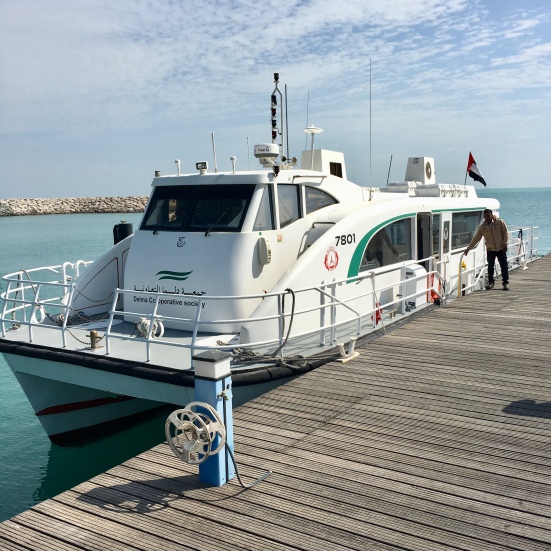 I don’t think the Anantara website is particularly efficient at explaining how the island is set up so hopefully this will help those of you that are as confused as I was. There are 3 resorts on the island: 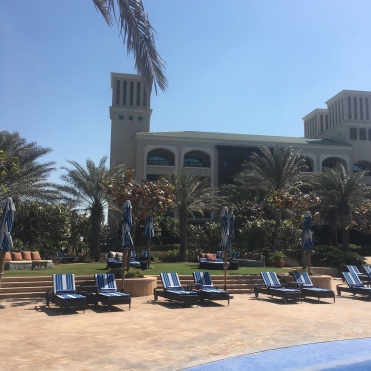 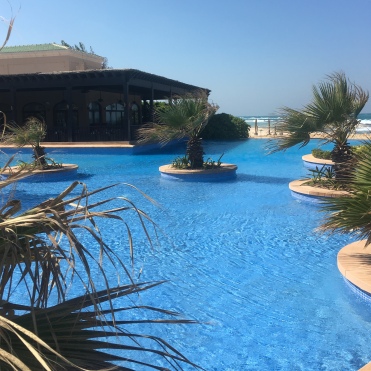 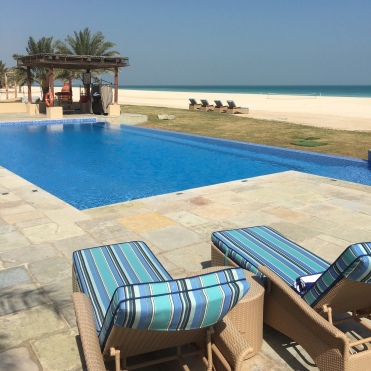 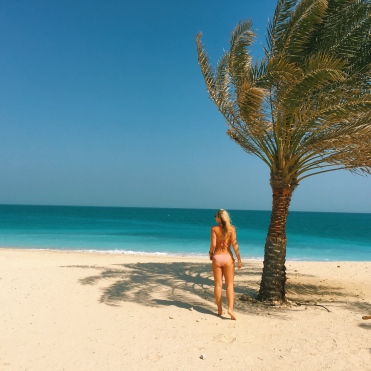 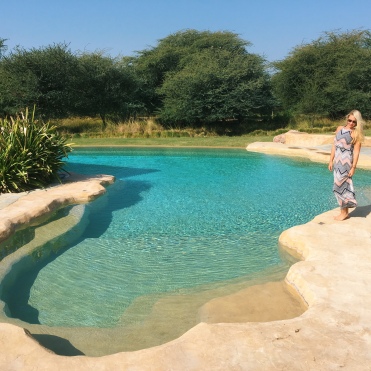 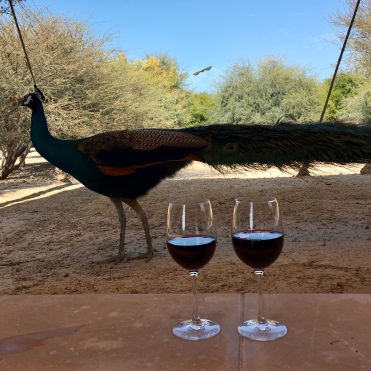 Al Sahel is the newest resort on the island and designed with an African Safari theme in mind, leaving you feeling very far away from Dubai. We opted for a one bed villa with a pool which we were really pleased with. All the rooms feature beautiful 4 poster beds, indigenous art and an awesome bathroom that opens into a private courtyard. The terrace is fab and not overlooked by any of the other villas with a view out onto “The Savannah” and the roaming wildlife. The pool is more like a plunge pool but was perfect for us to sit and quash a bottle (or two) of wine while admiring the views. It was delightfully peaceful and the perfect spot for a complete chill out. Each resort has its own pool so if you wanted to save some cash you can opt for a villa without a private pool. 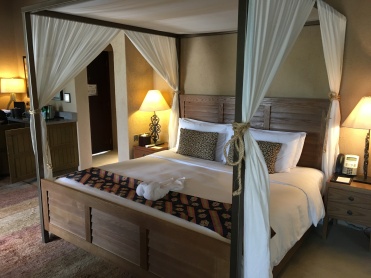 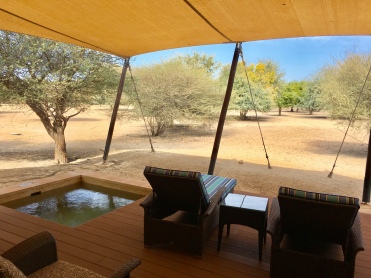 Each resort has a restaurant on site, with Al Sahel featuring “The Savannah” an African themed venue. Al Yamm sports a nice looking Italian, although we didn’t actually try it, and the Desert Islands Resort houses an international and Arabic restaurant. When we arrived we were advised that “The Savannah” had a BBQ night that evening, which was pretty much a night buffet, with live cooking stations and as you would expect a lot of meat. The food was nice, not exceptional, but we had a lovely evening. Each resorts’ restaurant also caters for breakfast with a continental buffet and a hot cooking station. It wasn’t a huge spread or anything particularly fancy but was nice enough. On our second day we visited the Desert Island Resort and stopped for some food at the pool. We ordered what we thought was tandoori chicken with salad but what came out as a rather greasy wrap which I’m sure was made of shawarma meat rather than off the bone chicken. It wasn’t great but we were so hungry we ate it anyway. I wouldn’t recommend eating here. We were due to eat in the Italian that evening but after spending a couple of hours chilling in the pool (with a bottle of course) in the late afternoon we decided to order room service and slob out in our dressing gowns instead. Again the food was nice but nothing to write home about. This is my only complaint about the resort and something I’d actually heard from a fellow blogger. It’s a shame as all other aspects of the resort are fantastic but the food really lets the place down.

You cannot go to Sir Bani Yas and not do the wildlife (safari) drive. These operate 3 times a day and cost 250 AED per person. It’s totally worth every penny and so much fun. I was like a kid at Christmas I was that excited! The drive was about 90 mins which was perfect and they even pick you up in a proper safari truck which they imported from Africa to ensure it has an authentic feel. Our driver was fantastic and knew his way round the reserve and where to find all the animals. We managed to see pretty much all the species that I wanted to including the Arabian Oryx, Ostrich, giraffes and the 2 leopards who live on the island. He was great company and really passionate about the whole project. We didn’t get a chance to do it but he highly recommended the hiking trip as you can see a family of 16 giraffes wandering around one area of the island which is hard to drive around by truck. Be sure to book in advance of your stay if you want to do the safari as it can get very busy.  My husband and I were keen to do some kayaking in order to see the dolphins and sea turtles but the weather was really windy (I’m talking gale force), which put me off going anywhere near the sea for fear of freezing my bits off, but I’ll definitely be doing it next time. 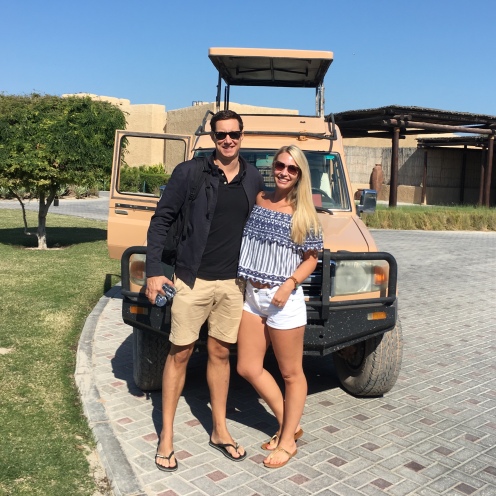 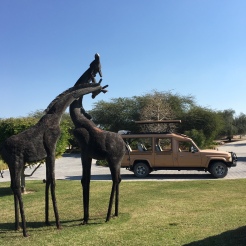 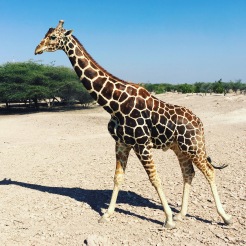 Despite the lack of good food we are already planning our next trip, that’s how much we enjoyed it. It’s a quiet resort, and perfect for a getaway from the hustle and bustle of city life. Don’t expect too much going on in any of the restaurants and I don’t even recall seeing a bar of any sort. I think most people go there to totally chill out and enjoy their villas and the awesome wildlife. I’ll definitely be doing some more activities next time as its such a huge and beautiful island with so much to see. Just make sure you book at least a 2 nights stay, it is a serious schlep for just the one.